I went to the Rose Bowl Flea Market, in Pasadena, a few weeks ago to try to find some steampunk art supplies.  My head was spinning from all the stuff that was there.  I have a few projects coming up with a steampunk theme and wanted to see what was out there.  If you have not heard of steampunk, think....Johnny Depp, Edward Scissor Hands, Sleepy Hollow, or Jim Carrey's Lemony Snicket's a Series of Unfortunate Events....It's vintage, futuristic past, victorian sci-fi, speculative fiction...etc...

Anyway, I was walking around the flea market with my twelve year old son when, all of a sudden, I felt his arm fiercely swing towards me, stopping me in mid motion, nearly giving me a heart attack.  He said, "stop! I think I found the one...." his eyes twinkling and glazed, looking in the direction of a small crowd....I looked over in the direction and saw a scantily dressed teen girl.  BOYS!!! always looking at girls....you'd think I would be used to this by now, I've got two very "impressionable" boys.

This time, I thought I'd do the same thing to him to get a reaction, hahaha (wickedly laughing).  As we walked by a different aisle, some time later, I stopped him in mid motion.  I swung my arm, just like he did to me, and in a loud voice I said, "STOP! OMGosh! I THINK I FOUND THE ONE" he looked confused and a little terrified as he looked at the young salesman in the booth.  "....aaah.....Mom??!!!?" I heard him say in a shaky voice as I walked straight past the salesman and reached for a steampunk image inside the booth.  Once he realized I was talking about the image, not the salesman, he started breathing again and said, "Mom, that is NOT cool!".  The look on his face was priceless!

Moral of the story; watch what you say to your mamma!!!

I will have some steampunk ATC artwork in a few months to show you but for now, I want to show you this Frida Kahlo "Dia De Los Muertos" Day of the Dead shrine I made a while back.  Day of the Dead is November first and second and is celebrated throughout Mexico.  It's a day to celebrate those who have passed.  You can read more about it here.  I just recently started celebrating it, no one in my family ever did so I wasn't sure what it was at first.  One of my neighbors had a big Day of the Dead party four years ago and I wasn't sure what it was or what to expect.  It was all so well thought out that the experience left me wanting to celebrate every year thereafter.

Do you celebrate Day of the Dead?

Here's the back part of the shrine, I just glued some pink paper to the wood back piece of a wooden display frame.  You can get the frame at an arts supply store.  I added a Frida image inside an embossed shrine.  To get step by step directions on embossing, go here.  I also added some doves I got at a craft store. 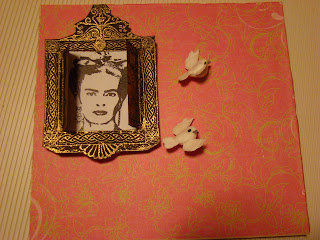 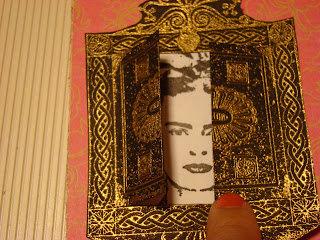 To the inside of the wooden display frame, I added a skelleton, small jug, small rug. 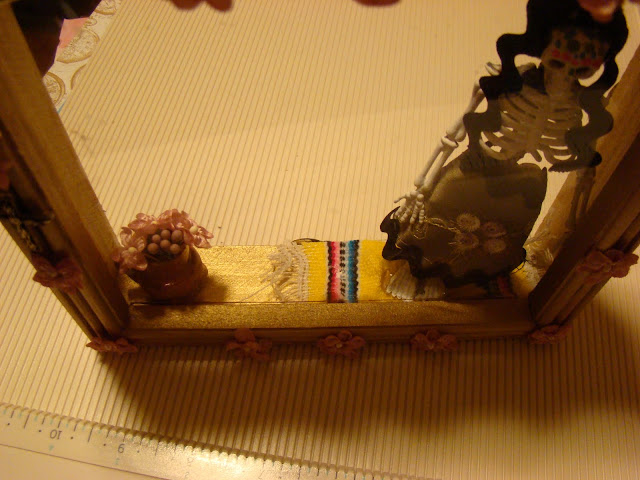 The skeleton was a beige color that I got at Michael's arts and crafts store but I painted it white with acrylic paint.  I dressed her up with some fabric scraps and glued rick rack around her head.  I also dotted some color to her forehead to make her look like a sugar skull. To the outside, I painted it in gold and I added silk flowers with hot glue.  I also added a metal cross and wings and attached them with a small nail. 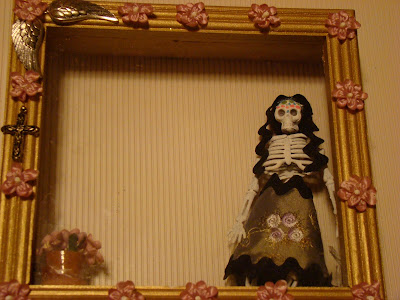 and when I put it all together: 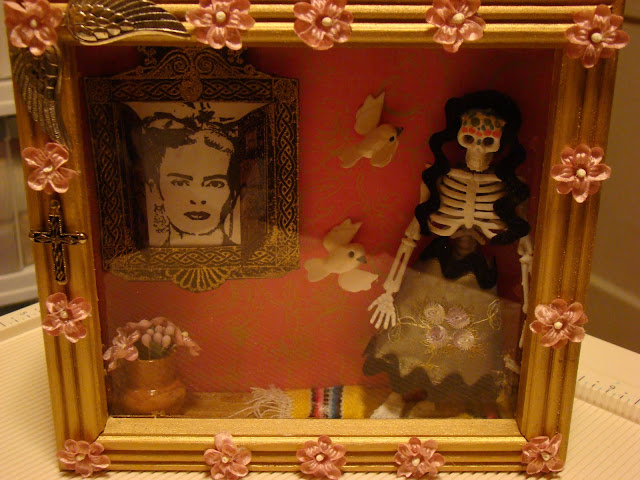 I used these two rubber stamps for my images;
I got the shrine from Inkadinkado and the Frida image from  Stampotique 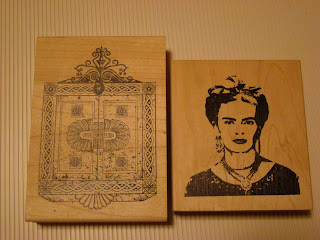 I like the way it turned out, I hope you liked it too.  I think I'll be brave and use bright colors on the next one.  I hope you get inspired to make a shrine this year, there's plenty of time to gather your supplies.  You can choose to make it to honor a relative that has passed and use embellishments that tell a story.  For example, if the person was a golfer, you may want to use a tee or a golf ball to decorate your shrine.

Thanks for stopping by, hope you have a wonderful weekend!