Are you one of those people who can laugh at a drop of a dime? sometimes I can't seem to control my laughter.  I laugh at everything and have had my share of uncontrollable bouts of laughter.  An older brother an a niece are the same way......just don't get us started.  It's kind of a curse sometimes because there have been times where it's inappropriate to laugh and there I am trying to hold my laughter, until I erupt.  Have you ever laughed so hard, you feel like your heart will stop if you don't stop laughing? this happens to me all the time and it doesn't help that I'm married to the world's funniest man.

Last week I worked at an earthquake conference, nothing funny about that until you get ME in the room.  I was working as a greeter and was assigned the task of seating late-comers so that they would not disrupt the guest speaker.  As people walked in late, I was to find them a seat and lead them to it.  I decided that a gentle pat on the shoulder was a great way to get a person's attention to quickly ask if the seat next to them was taken.  I would then get a yes or no response and fill the seat if necessary with someone who came in late.

During one of my gentle pats, I startled the person so bad that you'd think he was having a heart attack!.  His legs were crossed and the top leg swung up, like when the doctor checks your knee reflex.  He shook his head so violently that he's glasses went flying across the table, and of course I found this hilariously funny.  My instinct was to erupt in laughter, but I had to hold it in.....after all, I was in charge of not letting anything or anyone disrupt the guest speaker.  I couldn't even apologize to him for startling him, I was too busy holding back my laughter.  The only thing I could do was to conceal my lips with my hand and mumble "available" while biting my lips and pointing to the chair next to him.  His face was white as if he had just seen a ghost but he managed to shake his head while pressing his hand hard against his chest.  At that point, I could hear the other people seated at the table making funny noises as if they were holding back their laughter.  I went straight out the door to relieve the laughter and hoped no one followed behind, thankfully no one did.  The guy was okay, no paramedics were called, but I had a good laugh session outside.

Do you have a story to tell where you laughed uncontrollably? or did you get caught up in a funny situation and had to hold your laughter? let me know in the comments below, I'm sure I'm not the only one.

Last night I spent the evening with a group of friends in Montebello, a nearby City.  We made some Halloween cards and traded with each other.  There must have been about fifteen ladies there last night but I'm only going to show you a few cards that were my favorite.

The first one was created by Kim Lamos, I took the picture at an angle so you can see inside the window.  There's a moon in the corner and a picket fence. 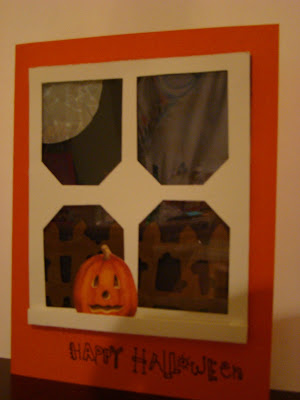 The next one is an ATC card and it was created by Tina Rivas.  She used rubber stamps to emboss images and stamped the skull image on acetate.  I like the way she kept the eyes white. 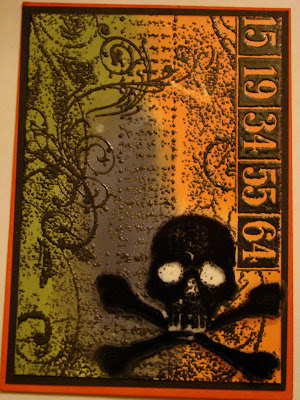 The next one was created by Rose Rodriguez, she stamped her image on acetate.  The stamped image is from Close To My Heart, Halloween collection.  I love the background paper and the paper punch at the bottom of the card. 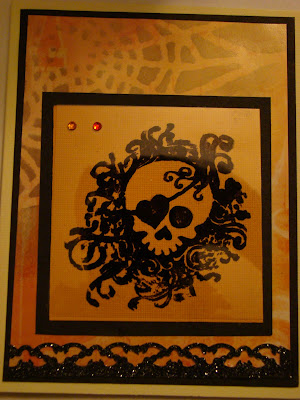 next is a cute vampire created by Carmen Mazzola.  She used rubber stamped images and colored them in with colored pencils. 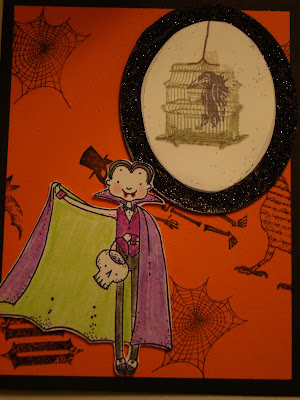 next is Maggie Arguilles' card, she is a published artist.  She said she used acrylic paints on acetate.  I've never worked with acetate, I like the look so I'll be trying that soon. Once I figure out her technique, I'll write a step by step tutorial. 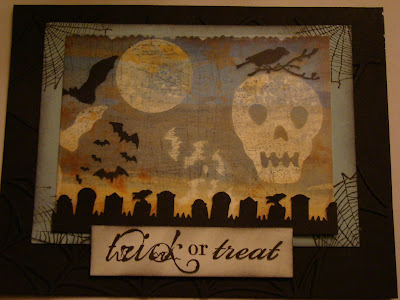 the next one is from Karen, I just love the paper she used and the little window in the center, how creative. 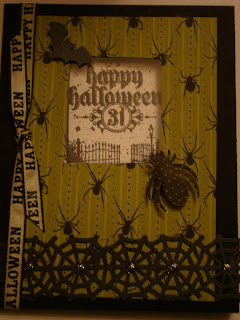 The next one is from Kat, she taped the card front to a goodie bag, how clever is that! she also wrapped a candy bar in scrapbook paper and placed an ATC card on top......I ate the candy bar before I took a picture, sorry....but you get the idea, right? 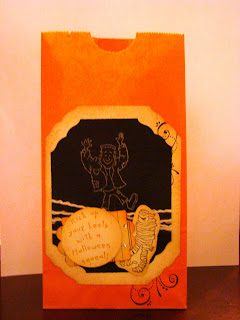 and the last one is mine, I feel it's kind of plain after looking at all the cards these ladies made.  I used a Day of the Dead loteria card stack and triple matted it with card stock to make the card stand out. I purchased my loteria at Olvera Street in downtown Los Angeles but I found a website store that carries it, here's the link if you're interested, they're located in Santa Rosa California: Day of the Dead Loteria. 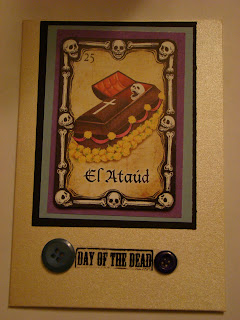 I hope you liked these Halloween/Day of the Dead cards and I hope you've been inspired to make some.  Thanks for stopping by and I hope you have a great weekend!