A young couple buying a house with two bathrooms.  The story would end there if this was a normal couple but, for this couple, it's just the beginning.

It started out with the wife wanting to remodel both bathrooms.  "We can do one with a garden theme and the other with a Roman theme", she would say to her husband, who would then disagree with her taste in decor as vehemently as he disagreed with placing the bed away from the window.  The disagreement continued for months until one day, one of them, they later forgot who came up with the idea, they decided to split the bathrooms between the two.  The husband would pick a bathroom and remodel to his taste and the wife would do the same for the second bathroom.  His theme was.....well there was no theme.  Her theme was a Romantic Roman Garden.  You would think the story ends here......I assure you, it is only the beginning.

As the wife enjoyed a shower made in heaven, due to her extensive research in shower heads and ancient Chinese Zen methods used in remodeling, the husband enjoyed a mediocre shower with a $9.99 shower head.  The wife soon realized that her bathroom was always clean and smelling fresh.   While the husband, sad as it was, didn't spend enough time cleaning his bathroom, it didn't quite meet the standards of cleanliness and freshness as the other bathroom enjoyed by the wife.

Ten years went by and the wife continued to keep it a secret, always having to explain why she showered twice a day and why she spent so much time in the shower.  But, this never even began to slow her down, she enjoyed that bathroom like no other.  She thought she would be in shower heaven for ever......UNTIL.....


One day, the unexpected happened.  His shower was out of commission.  Fearing he would use hers and therefore unlock the secret, she quickly thought of ways to block him from using it.  "Hunny, this would be a good time for you to start a gym membership, with your bathroom out and all.  You can work out your big muscles and shower before you come home".  She even resorted to the mom factor, did I say she was desperate?,  "hunny, why don't you visit your mom for the next few days, she must be so lonely.  And while you're there, it might be a good idea for you to shower there, you know, to save time".  He shot down her ideas faster than she could think of new ones.  The day finally came, he went in her shower.

His experience with the heavenly showers was exquisite and superior.  He felt like a king.  It blew his mind away instantly.   The perfect speed of warm water running down his hair seemed to massage his every muscle as it trickled down his legs and onto his feet.  The hot steam felt rejuvenating as it made it's way through his lips cleaning every single organ inside.  He got the feeling he could stay there for ever.  When he came out, two hours later, he felt refreshed and energized like a clean twelve year old boy.  Needless to say, he was never going back to his old dumpy little shower.

So now, the poor wife needs a wrench to turn on the water as his strong hands close the water valves too tight for her little hands.  She now has to clean it several times a week, as there are traces of dirt everywhere.  She must now live with an air freshener and streaky glass and a large pair of house slippers.

Some stories do have a sad ending, and sadly, this is one of them.  She had been determined to keep it a secret for as long as she lived.  She had numerous visions of herself at her deathbed, that would happen fourty, fifty, sixty years later, whispering her last words just before she would die, "hunny, I love you very much, you know that, right? I have always loved you, but, forgive me for not telling you sooner....go, waste no time, my love.........take......a.......shower....". 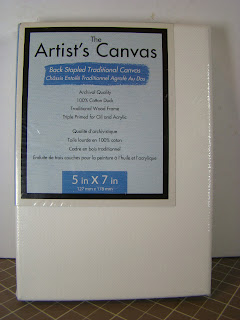 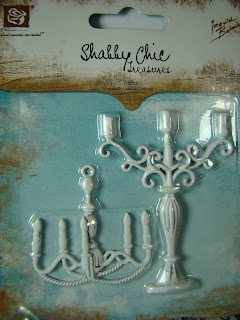 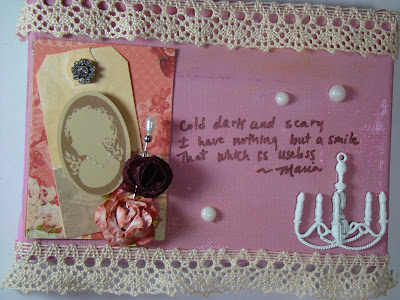 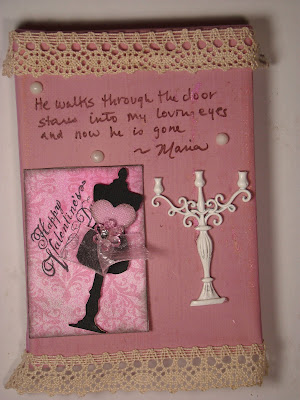 There is a large group of ladies that meet on a regular basis to chat, craft, hang out and trade handmade cards. We usually meet for a couple of hours and snack on delicious food and coffee while someone in the group teaches the others the latest techniques in card making. The minute you walk in the room you're struck with the energy and passion for card making and paper crafting. It's something that only a crafter, like myself, can understand and appreciate. The conversations are always dynamic as you hear things like glitter, rubber stamps, embossing, distressing or die cuts. Today's conversation was on "shaker cards". Shaker cards are greeting cards that when you shake them up and down, a part of the card will rattle with beads or confetti or even candy!  These are really fun cards, specially for kids and teenagers and the occasional fun person that appreciates something different.  I brought home all my trades but I'm only going to share a few with you selected at random.

The first one is mine, I cut out a lava lamp image from the internet and added small red beads inside a plastic pouch.  I used Microsoft Word to add the sentiment 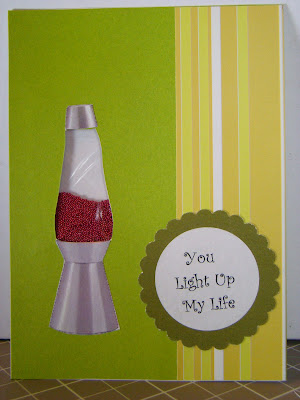 On the next card, by Rose Rodriquez, she created a circular card filled with Valentine's day images.  In the heart, you can see she used cake sprinkles, brilliant! 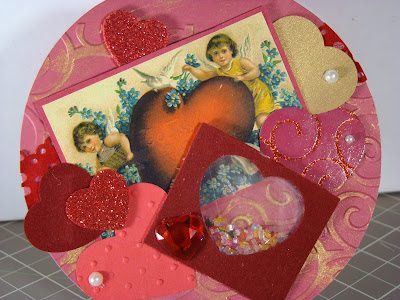 This next one, created by Tina Rivas, she used confetti inside her shaker circle to simulate hard candy.  The candy machine was stamped and she used Crystal Effects (a dimensional gel) on the machine to give it that shine, way cute: 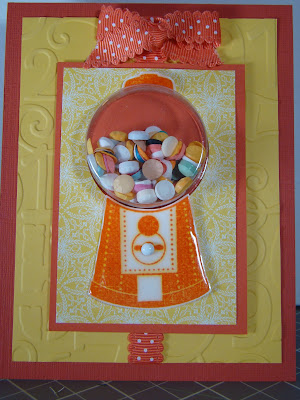 The next one is by Mary, she used a cupcake cut out and added glitter to the inside of her shaker card, too cute: 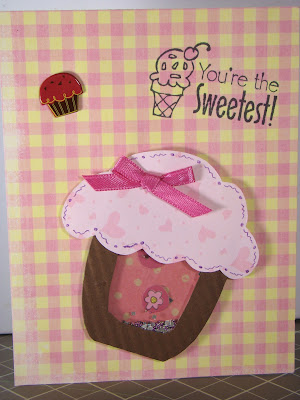 And the last one I want to show you has a really cute sentiment "sending worm wishes on your bug day".  The shaker part is on the bug on the top right hand corner.  She added tiny seed beads. 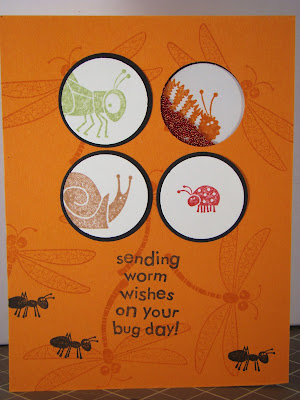 I hope these cards inspire you to make your own shaker cards.  Thanks for zooming by, come back again for more cards, more crafts and more fun!

Hello my dear friends in Blogland!!!! Thanks for dashing by.  Oh, how I missed you all.  I'm back after a very long hiatus.  Partly because I've been busy (I got lazy) and partly by no control of my own when my computer crashed.  But mainly because I've been spending more time with my 80+ year old parents.  I'm part of the "sandwich" generation.  I'll have to say though, it's easier to take care of my parents than it is to take care of my kids.  While my parents require a lot of quiet relaxation and conversations over cookies and tea with soft music in the background, my kids, on the other hand, require a lot of running, heart pounding rock climbing, thrilling roller coaster riding, sweating, screaming...etc., etc.

I've been gone so long and I have missed so much from your posts, I have a lot of catching up to do.

For my first post back I have a very simple and inexpensive but fun project.  It only took me a few minutes and made a world of difference to my little one.  I purchased a backpack for my son but I miscalculated what's cool and not so cool in his little world.  Last week he liked Winnie the Pooh....today?.....not so much!

I bought this backpack for my little one but as soon as he saw it he said, "mom, you must be kidding! I'm too old for Winnie the Pooh".....oooookay........never mind that just last week he begged me to read him a Winnie the Pooh book. 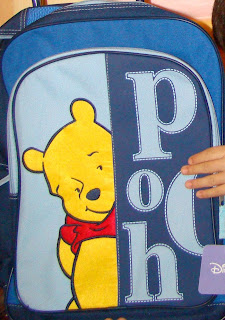 With my busy life, I was not about to return it and spend another eight hours looking for another one.  I'm a cool mom, not a crazy one.

After a trip to Joann's, he picked out some fabric he liked.  I also picked up some contact paper and some hot glue sticks. 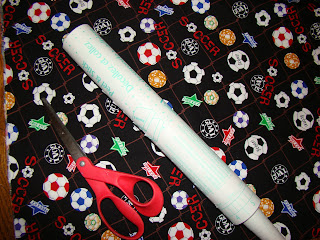 I placed the contact paper over the image I wanted to cover and drew around it with a Sharpie pen. 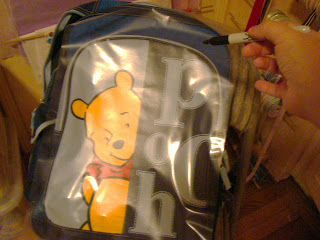 I used this as my template to cut the fabric 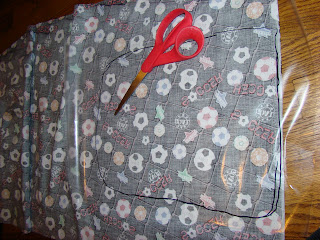 Once I cut the fabric, I removed the contact paper and I had the perfect shape and size I needed to cover Pooh's image.  I then used the hot glue gun to glue the fabric in place going all around the fabric and sealing it at the same time.  He loved it! 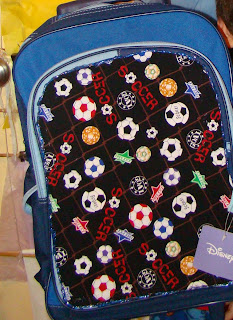 Thanks for visiting.  I cannot wait to come over and look at what you've been working on while I've been gone.  Although I will not be posting as often as I used to, I have a ton of projects lined up and cannot wait to show them to you.