Before I get into my tutorial, I just have to share a story about my baby.  My seven year old has no limits sometimes, which in a way it's good......sometimes.  Once, when he was two years old, I was sitting on my sofa watching TV and all of a sudden, this little tiny baby comes flying over my head and lands on the floor like in a "frog" position.  It scared me into a coma, almost.  I didn't make a big deal out of it, hoping that if I ignored it, he wouldn't do it again.
That two year old baby is now a very DARING seven year old.  We took him to Disneyland two weeks ago and he decided he would show the teenagers his break-dancing mooves at California Adventure's Street Party, in his pajamas even.  They cheered him on like if he was the main attraction.  People running from all places trying to get to the circle, that quickly surrounded him, to take a peek at what all the fuss was about.  I had to raise my camera high above people's heads to take these pictures.  He's definitely heading to Hollywood.  If not for his dancing, it will be for his adorable looks.  Where are those Hollywood agents when you need them, lol. 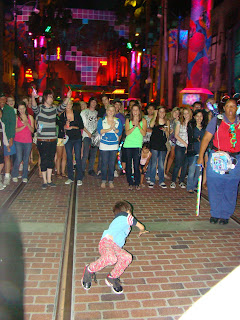 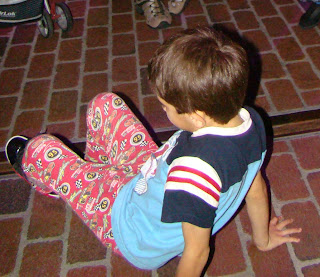 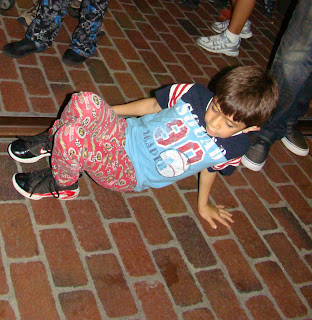 Well, enough about my baby.  I made a cute triple frame out of old computer diskettes (floppy disks), remember those? I remember the exact day I stopped using those, I was three, oh yes I was, I most certainly was! Just ask my seven year old, he'll verify I was three.  It's so funny, he always tells me, "mommy, you look like you're in your twenties" and I answer, "oh thank you honey, you look like your a teenager" and, of course, that makes him very happy.

Back to my project.  Here's what you'll need: floppy disks, scrapbook paper, scrapbook pictures (or your own pictures), 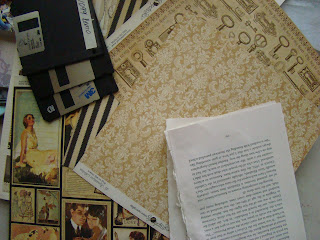 Zots to attach heavier embellishments, I'll be using them on a key 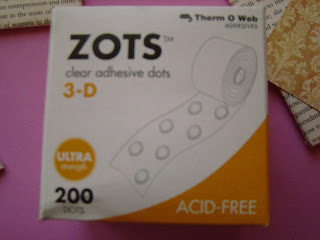 fringe, ribbon, what ever you have 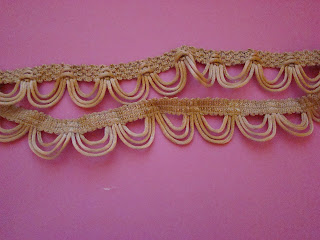 A rubber stamp with a sentiment, ink pad for the rubber stamp, ribbon, scissors, hot glue gun (I've had mine for over 20 years), a variety of punches, I'm using Martha Stewart's monarch butterfly. 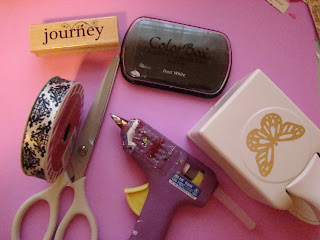 First, you'll need to wrap your floppies with scrapbook paper.  I used pages from an old damaged book.  The picture below shows the back side and the front side, how it will look like after you cover the front.  I didn't cover the back side, only the front. 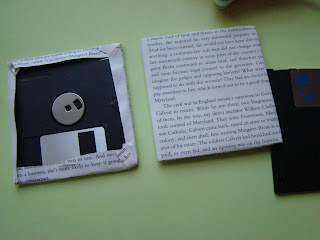 An easy way to fold the corners is to cut out the corner of the paper at an angle like this: 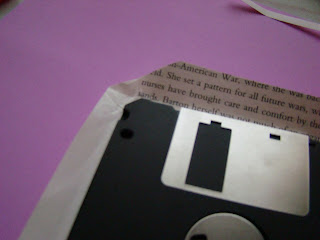 then fold over for a nice fold: 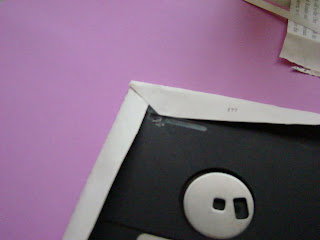 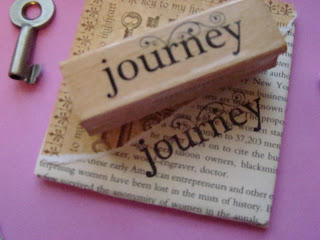 I used coordinating paper to embelish mine: 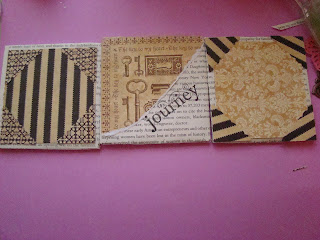 Here the are individually and embellished: 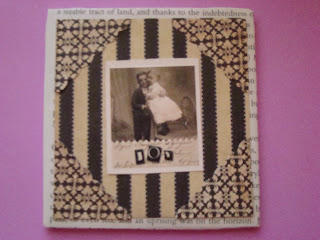 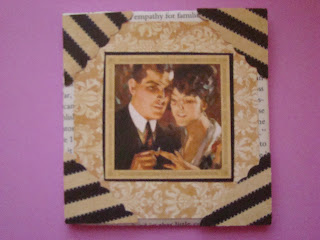 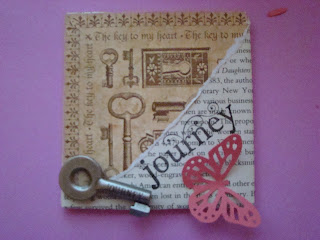 Next, turn them over in the order you want them to hang and hot glue the ribbon they will be attached to on the back: 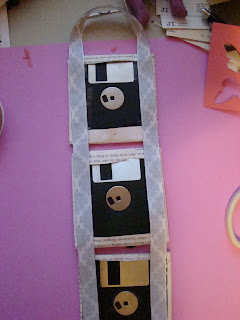 Next, I added the bottom embellishment, also with hot glue: 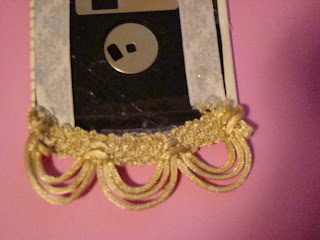 You can add your pictures and more embellishments or maybe follow a theme.  I didn't cover the backs, but if you are going to give this to someone as a gift, you'd probably want to cover the backs with scrapbook paper, maybe you can make it double sided and decorate both sides, that would be nice.