Is There A Chocolate In The House?

On Friday night I will be going to craft party at a friend's house and each guest is asked to bring a small hand made gift to trade with another guest. Hmmmm what could I make that will bring a smile to someone??? My idea came in a two part series.  My best friend posted a questions about chocolate yesterday on facebook and I thought, most ladies I know LOVE CHOCOLATE. So I knew my theme for my gift would be CHOCOLATE!!!

Now for the second part of my idea: Today we had an earthquake in California and it was slightly felt in the Los Angeles area.  Sitting there on the sofa watching TV, I felt the quake and thought, "wah-lah! I'll make a fire extinguisher cabinet".

"but instead of the extinguisher, I'll place a CHOCOLATE or two inside". See, my crafty mind works even in the face of danger.....that could be a bad thing.   I've always said, I'm a  craft-a-holic and a choc-a-holic.  I wonder what Freud would say about this!!! would I be chocraft-a-holic? actually, that sounds like a dinosaur.

Here's how I made it:
I found a small wooden box I purchased at a yard sale for ten cents, it was pretty but I knew I wanted to do something different with it.  I gathered my supplies; acrylic paint, red and white, a sponge brush, a hot glue gun and CHOCOLATE 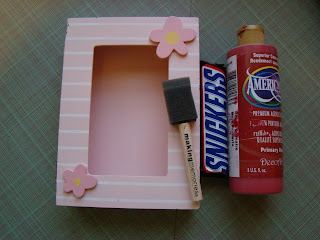 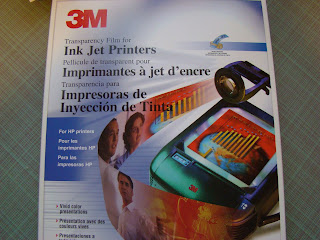 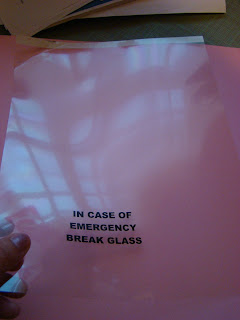 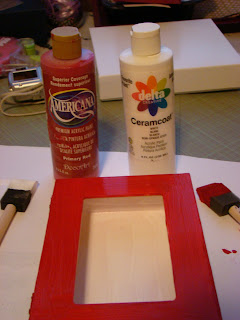 I then used the glass as a template to cut the transparency and replaced the glass with the transparency.
Seriously, you have to do this part, you wouldn't want your friend getting hurt by actually breaking the glass and then chewing on CHOCOLATE covered in glass, safety first my crafty friends. 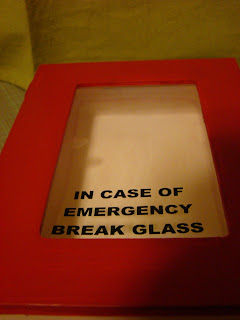 I then hot glued the CHOCOLATE  inside, first I placed a large one but decided that the two smaller ones looked better: 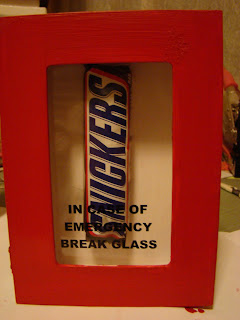 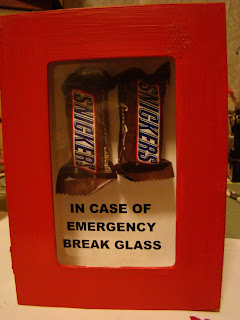 This will definitely bring a smile to someone who loves CHOCOLATE as much as I do.  A variation of this idea would be to place a gift card inside for a shop-a-holic.