La Llorona At My House!

Hello Bloggers! I'm back this week but this time I have an urban legend very well known in Mexico and Latin American countries.


"La Llorona"  "The Weeping Woman"
Legend has it that long ago a beautiful woman took her children to the river to drown. She did this in order to win the love of a man she was in love with but the man later rejected her.  Full with grief over what she did, she then killed herself.  Once at the gates of Heaven, she's asked about her children.  When she couldn't account for them, she was forced to roam the world to look for them.  She is known for taking any misbehaved children with her. 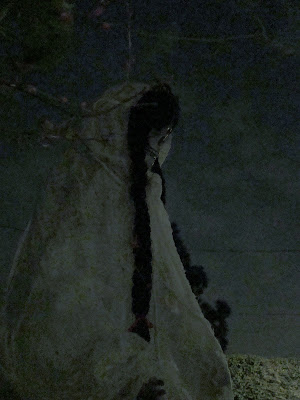 LA LLORONA AT MY HOUSE
I'm going to share a video with you that my son took while I was trying to calm the puppies down one night, not long ago.  The puppies were very feisty and running around wild.  We wanted to photograph them and couldn't get them to settle down.  I didn't know my son was filming it, I thought he was just taking a picture.  You can hear me say, "take it, take it, take it" in the video towards the end, as I was telling him to take the picture.  Throughout the video, you can hear weeping in the background and a loud sigh at the end.  The TV was not on and my son and I were the only ones in the house besides the puppies......or so we thought! It's a scary thing when you capture something strange or inexplicable on video or camera.  The puppies are too cute and they might not let you concentrate.  But try to listen to her in the background concentrate on the sounds, specially towards the end when you hear a loud sigh.


If you have a spooky story, leave me the link in the comments below.

Hope you have a scary week everyone, thanks for coming by.